I have been working on a wireless thermal printer for an application that I have in mind.

The system is composed by the following parts:

The WiFi shield uses the SPI bus which leaves the serial port free for the printer. In the video below you can see a simple example of Internet-to-Printer connectivity. The system, as a standalone system with no connection to a PC, is started up and it pings Google. When a successful ping response has been received it prints the letter “P” with the printer. More information could have been printed here, but since I use an Arduino Diecimila with very little memory, the program just fits on the microcontroller as it is. 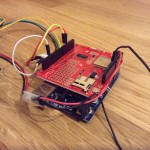 The Arduino with the TI CC3000 WiFi shield. 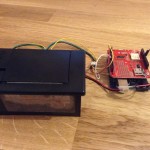